Designing humankind's mission to new destinations in our solar system.

RASC-AL is a university-level competition sponsored by NASA and the National Institute of Aerospace (NIA) to design mission architectures for future crewed missions in space that incorporate innovative technology and commercial cooperation.

Last year, our team was a finalist in the competition and presented our proposal for a commercially viable replacement for the International Space Station at Cape Canaveral. This year, we're working on a hybrid propulsion stage (both solar electric and chemical propulsion) for a conjunction-class mission to Mars. We are also collaborating with a team from the University of Minnesota Twin Cities, who are working on a propellant resupply architecture.

CSI’s RASC-AL mission has a long history–well, as long a history as possible in a three year-old club–of success. This was Columbia’s third year participating in RASC-AL, a NASA-sponsored aerospace engineering competition, and its third year advancing to the finals in Cocoa Beach, Florida. However, CSI’s legacy by no means guaranteed our success. We had to work hard to move from sitting in CSI’s interest meeting in September to standing in front of NASA, presenting our reusable hybrid-propulsion stage design. Our team has come far this year, and looking back at the past nine months, it’s been an incredible journey. 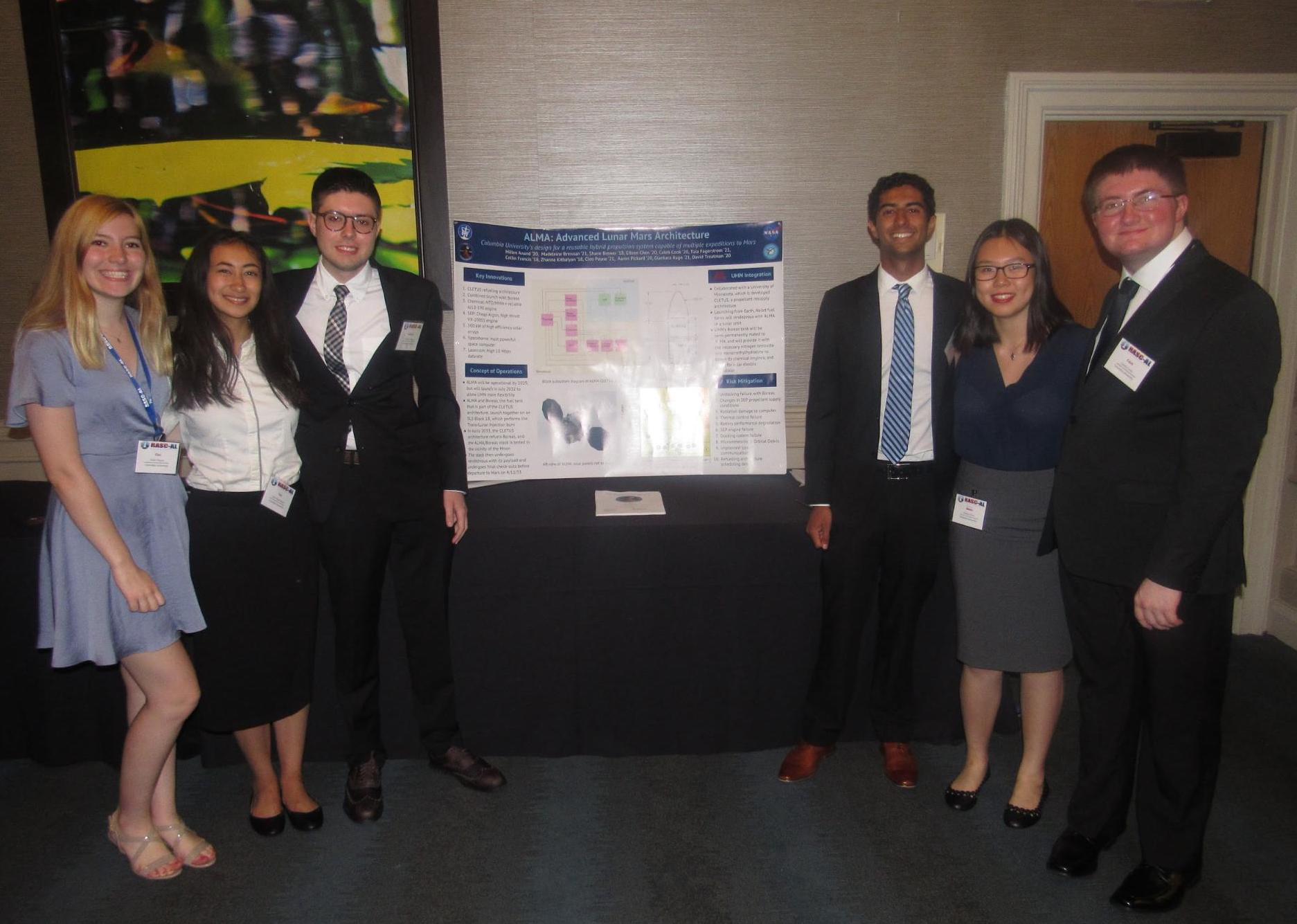 We were tasked with developing a reusable, refuelable in-space stage that utilized both an electric and a chemical engine, and could transport a payload from cis-lunar space to Mars orbit and back. The development of our Advanced Lunar-Mars Architecture, or ALMA, began with delegating subsystems to each team member. Everyone specialized in something, from thermal control to trajectory to communications. We spent first semester researching systems, conducting trade studies, and determining what technologies and techniques would benefit our design. We also took on the extra challenge of working with a group from the University of Minnesota, who provided ALMA’s refuelling architecture. Collaborating remotely with another school wasn’t easy, but the partnership was beneficial on both sides. Not only did our designs profit–working together saved money and added efficiency–but we learned a lot about effective communication and collaboration. The Columbia-UMN partnership was ultimately the only successful one in the competition, as we were the sole partnership that advanced to the finals. But before we could get there, we still had to perfect our own design.

As the spring semester arrived and our abstract, mid-project review, and final paper deadlines approached, we combined our individual research into a streamlined paper and presentation. With each successful submission, we developed our sections, adding more specifics and analysis as well as new considerations such as a budget and risk-mitigation. Finally, in April, we received the good news: we were going to NASA! After a year of preparation, it was thrilling to stand in front of the judges and present our design. Though there were some hiccups (notably, an outdated version of our presentation being displayed, necessitating some improvisation), the presentation went well. ALMA was largely well-received by the judges, but we were also given feedback to make our future designs even stronger. Next year, we plan to perform more in-depth analysis, go into more detail about our development and testing processes, and reevaluate our risk mitigation process.

We were the second of fourteen teams to present, so the pressure was off for the rest of the week. We spent lots of time on the beach, hanging out with each other and getting to know the other teams. The trip culminated in a tour of NASA’s Kennedy Space Center, where we saw the Space Station Processing Facility, Swampworks, and the Saturn V center. The combination of doing cool space stuff and hanging out in Florida created one amazing week. The technical experience and the opportunities provided were absolutely invaluable, especially for a group made up of freshmen and sophomores, but arguably just as incredible was the RASC-AL group itself. I’ve never been part of any project with such a tight-knit team. Thanks to game nights, volleyball matches, and one memorably disastrous baking attempt, we all became friends early in the year and only got closer as the months progressed. The only thing better than going to Florida to talk to NASA was doing so with five of my good friends. 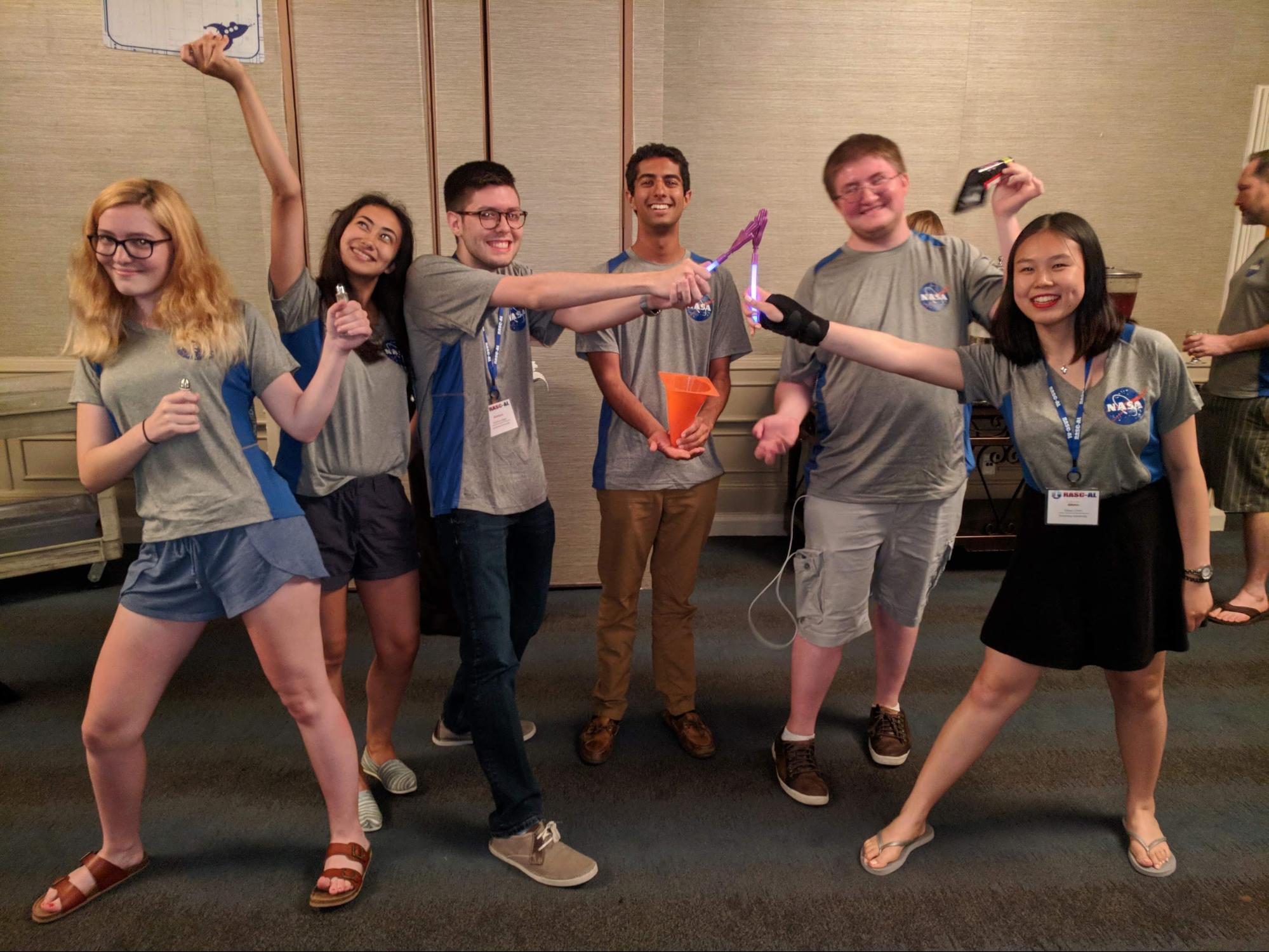 Back in September, many of us joined RASC-AL with no idea where to begin. It was sometimes overwhelming to realize how much I had to learn. But at the end of the day, every research dead-end, long day in Mudd, and logistical challenge was worth it. Reflection on our success is especially significant considering the academic composition of our group. We come from all four undergraduate schools and have majors ranging from mechanical engineering to English. It was inspiring to see people from such different academic backgrounds come together to create something. Of course, there’s always room for improvement. Next year, we’ll reflect on the judges’ feedback and our conversations with other schools as we take on another RASC-AL challenge, and our team leads are writing a post-mortem to determine what can be done better next time. All in all, participating in RASC-AL was absolutely one of the highlights of my year, and I can’t wait to see where we go from here. 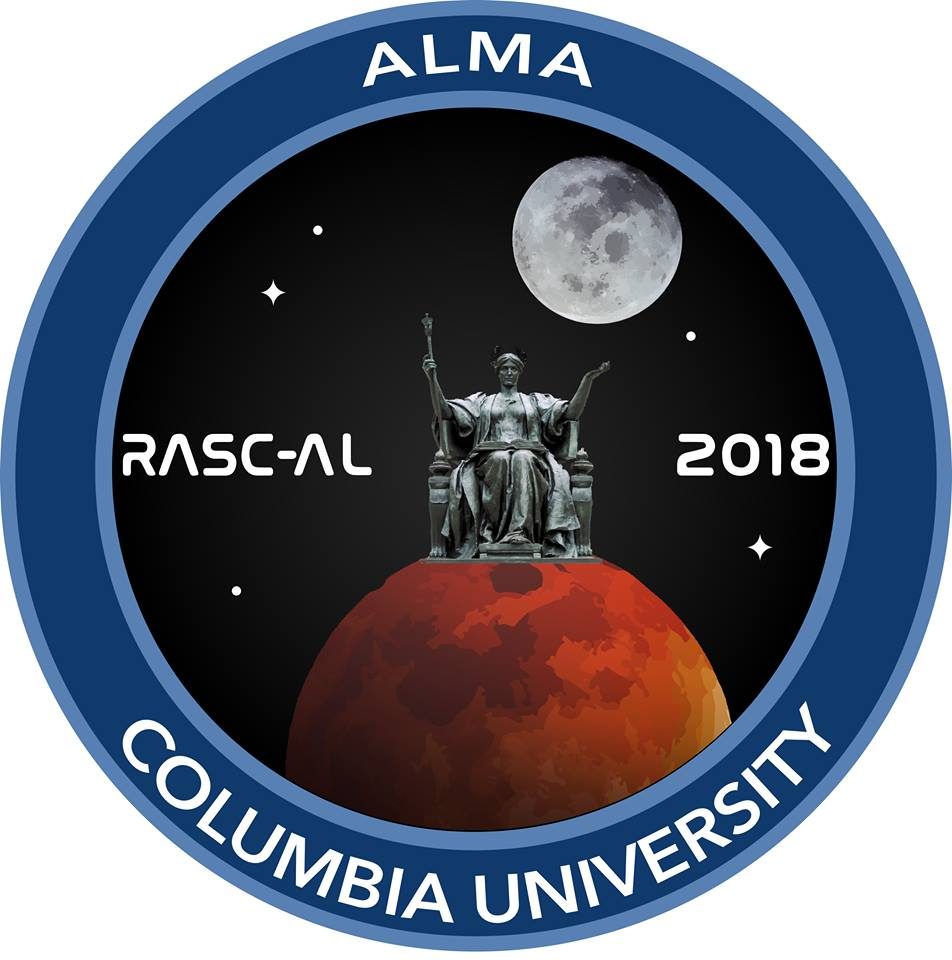 This year, CSI’s RASC-AL team is competing in the Reusable Hybrid Propulsion Stage challenge, and are developing the Advanced Lunar-Mars Architecture (ALMA). The challenge requires in-space hybrid propulsion (chemical and solar electric) that is refuelable in cis-lunar orbit and capable of transporting 50 metric tons to a 5-sol Mars orbit. We are collaborating with a team from the University of Minnesota, who is developing a system to supply ALMA with propellants, rendezvousing in lunar orbit. 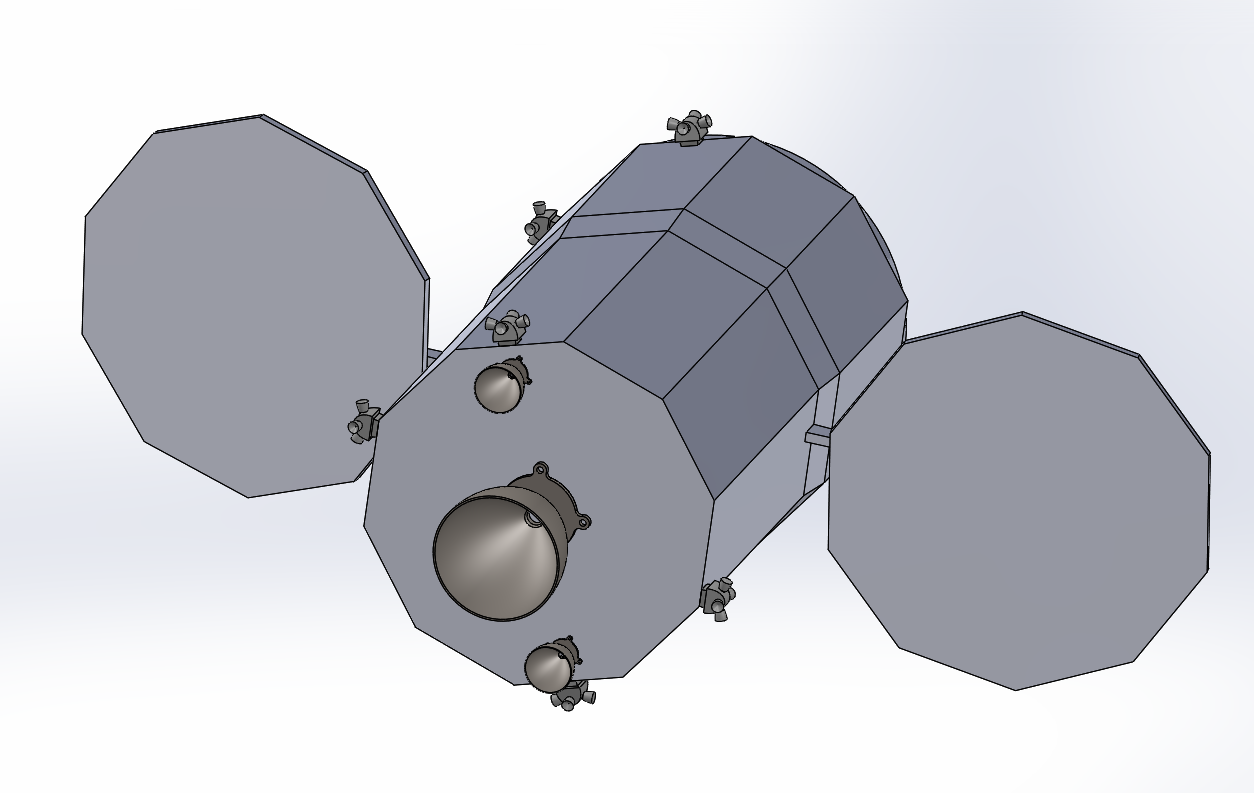 After submitting an abstract of our design, ALMA was selected by NASA to move on to the next stage of competition!

We are developing our Mid-Project Review deliverable for submission on April 1st, and will be presenting our work at a poster session at CU in Space on 3/23 in the Lerner Satow Room from 3-6pm.

We’ve continued making great progress on our Mars ice drill, the Lion Piercer. Our drill system will feature two subsystems, an overburden extraction auger to clear a path to the ice, and an ice extraction drill that extracts the in-hole ice for melting. Both drills utilize cylindrical casing in their drilling mechanism.

Furthermore, both drills will be moved by a gantry system mounted atop our simulated ice box environment. System mock-up: 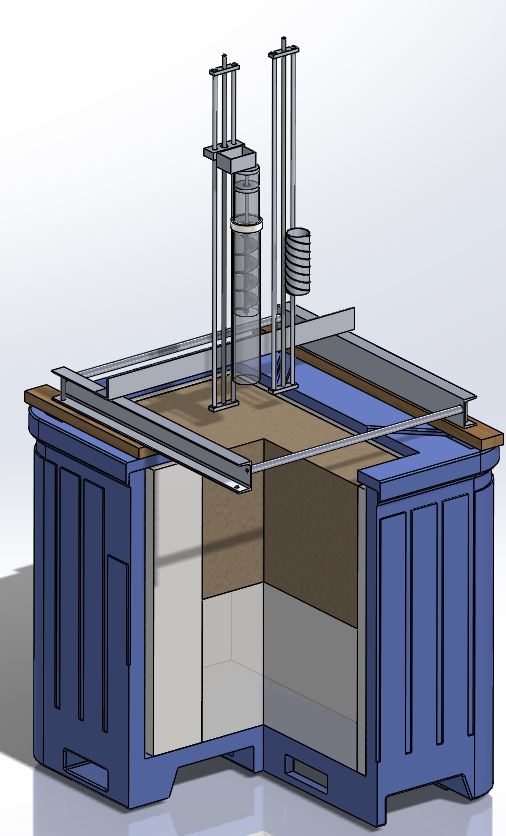 Our upcoming deadline is the Mid-Project Review on April 2nd, when we will be submitting a video of our drill prototype in action, featuring its mounting system, control interface, and operation excavating overburden and ice. In addition, we’ll be submitting a written document describing our development process and our integration and testing plan. 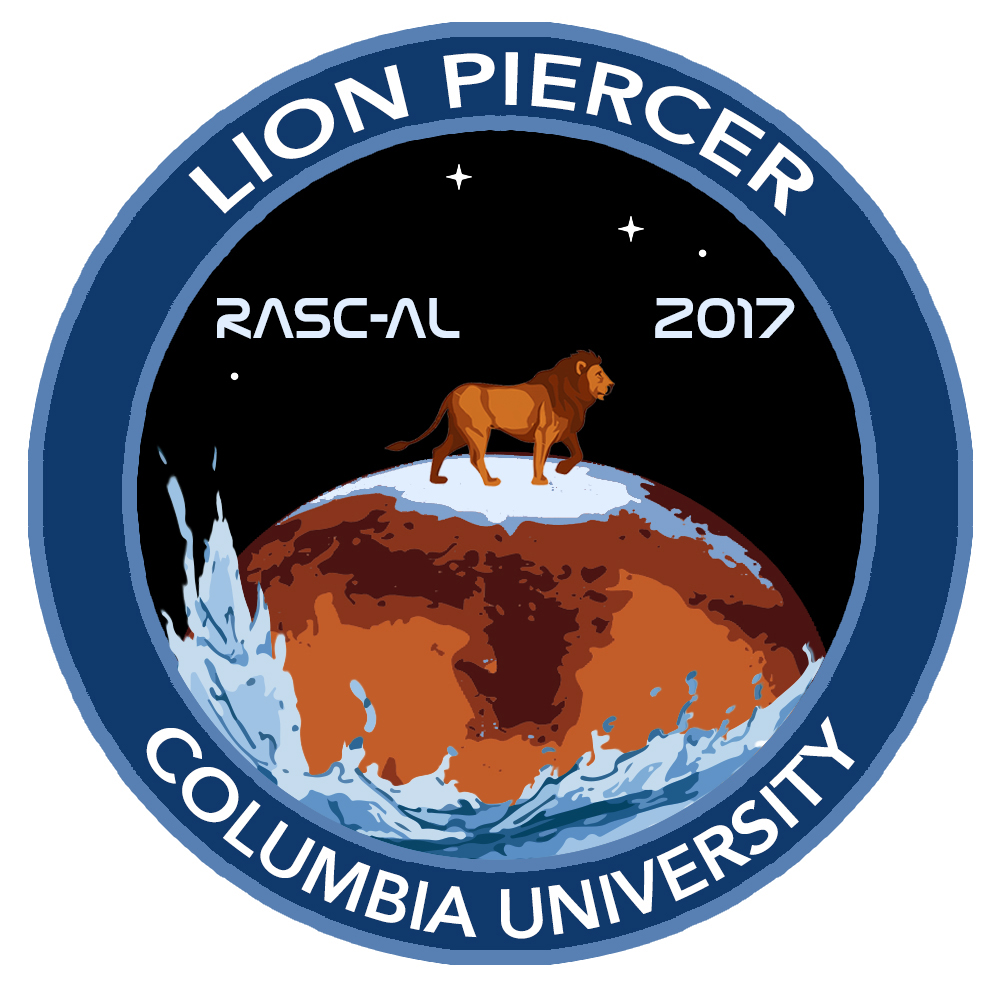 Our LEO Lion design has been selected to move on to semifinals! LEO Lion is a commercially-enabled LEO / Mars habitable module, featuring innovative technology and new commercial applications in space. Our next deadline is the Mid-Project Review on March 16th, when we will be submitting a 6-page mission concept and analysis plan to the National Institute of Aerospace and NASA for approval.

Our Lion Piercer, a device to extract subsurface water on Mars, is also making progress. Though we were not ultimately selected as finalists in the RASC-AL Mars Ice Challenge, we have received funding to begin building Lion Piercer. We potentially have the opportunity to re-enter the competition if we submit a Mid-Point Progress report on April 2nd.

Our mission proposal “Path to Deimos” was selected as one of twelve finalists to present at the annual RASC-AL Forum in Cocoa Beach, Florida this June! This is incredibly exciting - especially being the first time ever for Columbia to participate - and I couldn’t be prouder of what our entire team has accomplished. A big thank you to our project advisor Professor Mike Massimino for his invaluable support and guidance, and congratulations to all members of CSI for another job well done.

Our next major goal is to submit both a final technical paper and an oral presentation by June 2. The final paper will be 10-15 pages in length, fully implementing all the specific technical details and diagrams we laid out in our mid-project review, and our oral presentation will highlight key aspects of our mission and fill a 30 minute time slot at the Forum. In addition, we’ll also have to prepare a trifold board that summarizes our mission for the poster session. Based on how well we do at the Forum, two of the top-winning teams will be invited to yet another technical conference (e.g. AIAA Space) to share their concepts!

As we craft the two components of our final project in the coming weeks, you’re welcome to join the RASC-AL team anytime - just post a message in the Slack channel or reach out to any current member of the mission team if you’re interested. The Forum will take place from Tuesday, June 21 to Friday, June 24; more info on travel logistics to come. 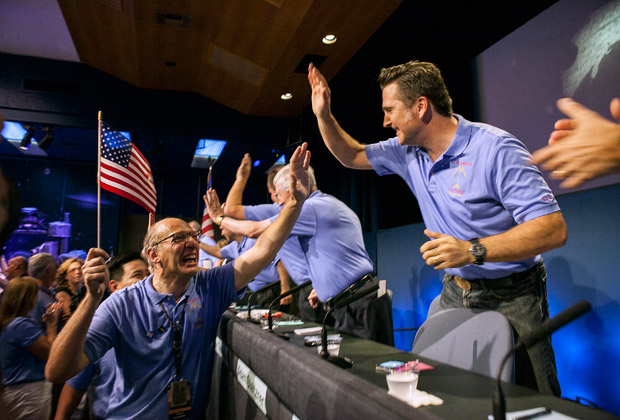 We submitted our mid-project review to the RASC-AL competition today, after making it to the second round. A big thank you to all the project team members who dedicated time over their spring breaks to work on our report. We will hear back from the competition judges on April 1st as to whether our team’s been chosen to proceed to the final round of the competition, which entails presenting a full 15-page technical paper at the RASC-AL Forum in Cape Canaveral this June! Stay tuned!

The “Path to Deimos” mission patch: 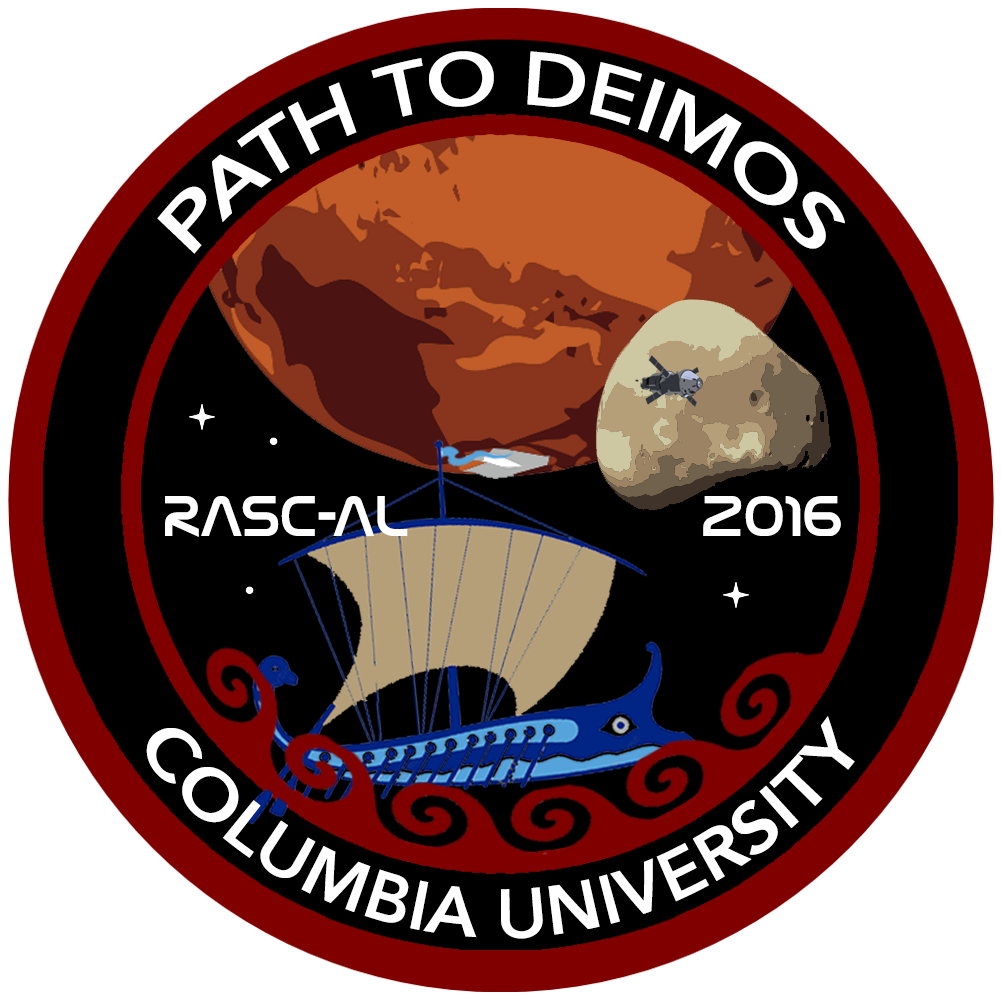 Our abstract “Path to Deimos” was selected to continue onto the next stage of the RASC-AL competition! We are now in full gear working towards our next goal of submitting a mid-project review paper by March 18, 2016. The mid-project review will be around 3 pages in length, with 2 pages of text that describes the mission concept and analysis plan, and one page with information graphics and calculations. Based on that, just one more round of cuts will be made before it’s decided which teams get to attend the RASC-AL Forum at Cape Canaveral, FL in June.

We’ll be recuiting new members to join the RASC-AL team in the coming weeks - stop by one of CSI’s general body meetings or reach out to any current member of the mission team if you’re interested!

Submitted Our Abstract posted in rascal

We submitted our abstract to the RASC-AL competition today. Our abstract proposed a mission that would deliver a crew of four humans to Deimos, the smaller and outer of Mars’ moons, as a stepping stone to reaching Mars. We will hear back from NASA on February 5th as to whether our abstract’s been chosen to proceed to the next round of the competition, and will update you then about our results. Stay tuned!