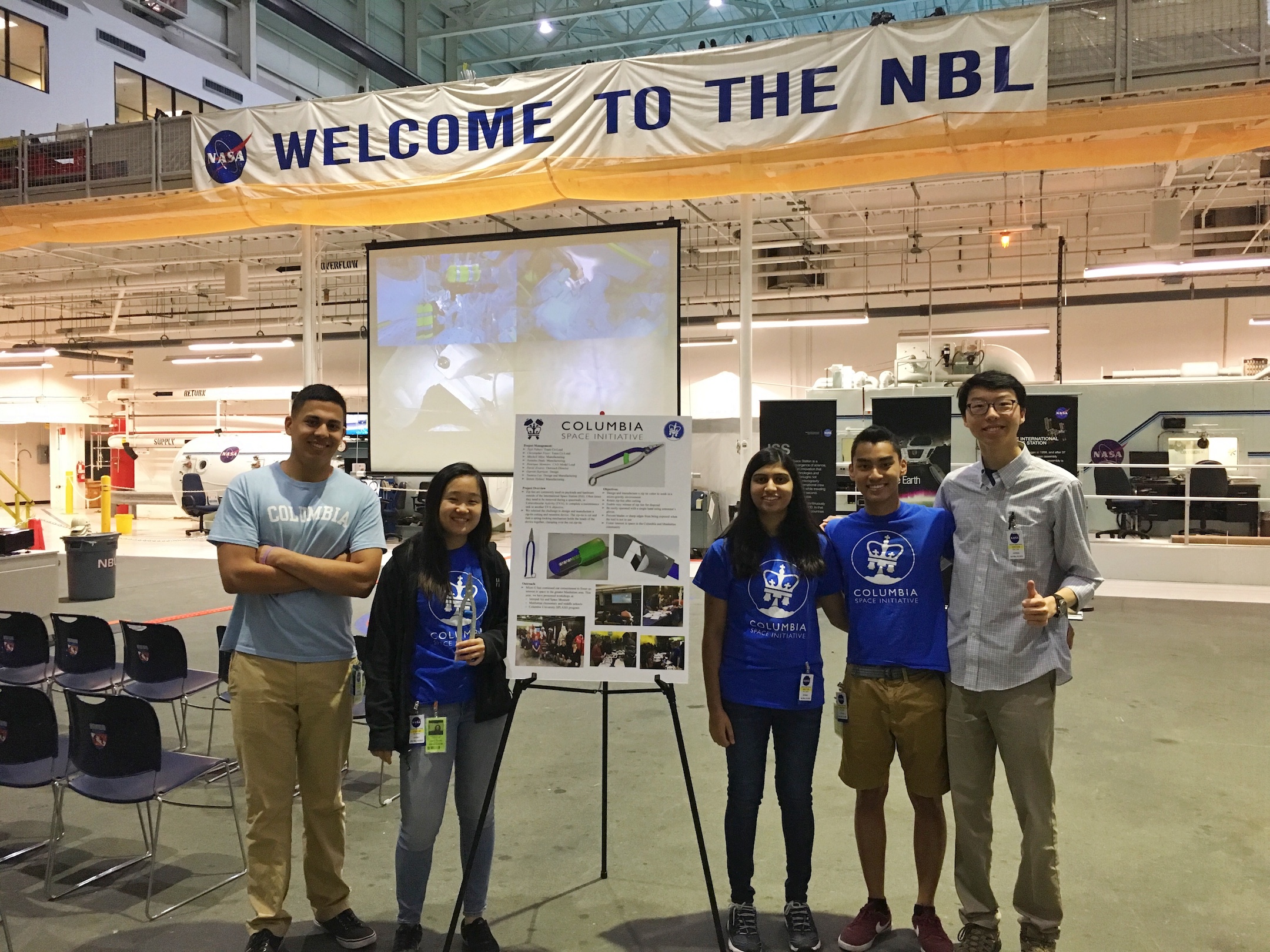 The obvious attraction of the Micro-G NExT project is certainly the test week at Johnson Space Center in Houston, Texas. This was what initially drew me to the project in September 2017, but what most people don’t initially look at is the year-long process as a whole. From picking a design challenge to drafting our proposal to eventually testing at the Neutral Buoyancy Lab (NBL), it was an invaluable experience that taught our whole team the value of hard work and collaboration.

Up until we were selected to go to Johnson Space Center in December, the whole process felt very surreal. It still hadn’t hit for many of us that we were actually doing important work that would be considered seriously by NASA. However, when the decision came in, the nature of the whole process changed. Rather than design, we had to focus now on creation. A lot of us were freshmen, which meant we had to learn many different aspects of machining very quickly. The learning curve was steep, but with frequent meetings and countless hours in the MechE shop, we were able to get everything down.

The crux of our device, the spring-lock mechanism, was what really set our initial designs apart from the final product. Cutting zipties was one challenge but being able to retain and dispose of them properly, thereby not allowing them to become more space junk, was something else entirely. Part of this solution was the rubber lining along the bottom clamp of the head of the device, but the other was the spring-lock mechanism. This would lock the device into place once the clamps were closed, keeping the cut ziptie between the two head clamps, and could only be opened again by pressing a lever on the bottom of the mechanism. Other than the machining of the other parts, getting this to work was a huge focus of our project going into the second semester. 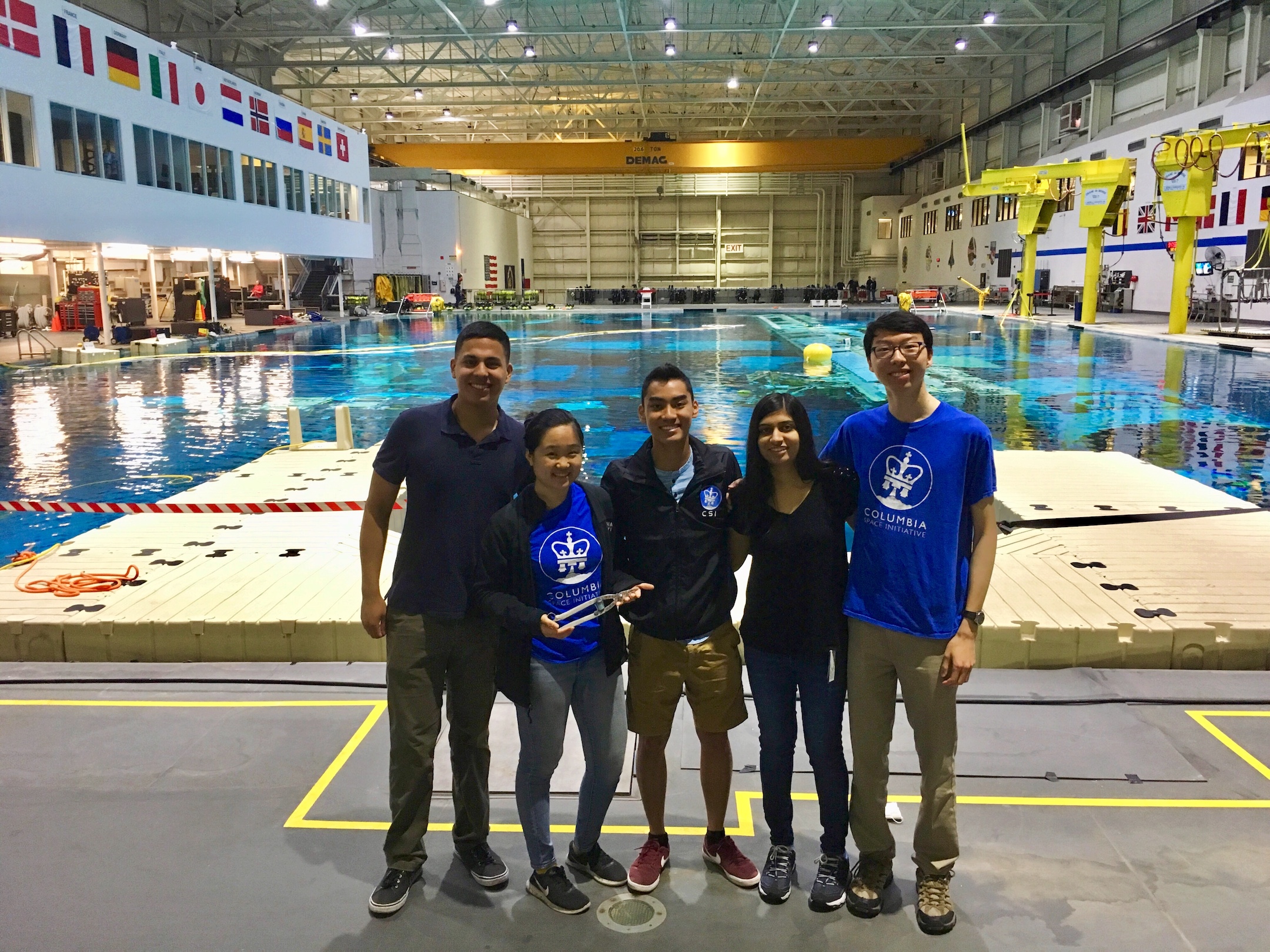 Our actual testing experience at the NBL was absolutely incredible. Being able to go past some of the more tourist-oriented parts of Johnson Space Center to really get into the meat of what happens there was a privilege. Even before the actual testing of the device, we were able to meet with several divers, researchers, and other NASA staff. They gave good feedback on the design of our device before and after testing and offered help and guidance along every step of the way. We had a Test Readiness Review (TRR) the first day we were there, during which we talked about how to operate the device and any safety hazards we could find. All of the NASA staff gave very constructive feedback and helped us make the modifications necessary to have a successful test the next day.

Micro-G NExT was an amazing experience, and one that we will all remember. There is a certain part of one’s engineering education that simply can’t be replicated in a classroom and being able to have that, while also doing valuable work for NASA, was an absolute privilege. For next year, I would like to see the Micro-G NExT team continue to pursue an invite to the NBL, and to allow more buffer time for machining issues. A big problem we faced was not allocating enough time for problem we’d run into during manufacturing, and this ended up making things kind of tight in the end. Being a part of this project was amazing, and I look forward to seeing what next year’s team will accomplish!